My husband will tell you that I do not have the best sense of smell. I am always the last one to notice a stinky diaper (hmmm) and have often failed to notice the tell-tale scent of something burning. SO, if I can smell something odd, it must really be something. Something terrible, like when you find oozing rotten potatoes at the bottom of your pantry (one of the absolute worst smells in the whole world), or when veggies (or worse--leftovers) have been shoved repeatedly to the back of the fridge for so long that they are unrecognizable as food, or (eew) a dead mouse in a little used closet, or...well I'm sure you can think of your own.

Last night my olfactory receptors were offended by something in Little Guy's bedroom. I picked up the litter of toys and clothes and vacuumed the carpet. I thought maybe I would find an unobserved accident from an earlier "airing out" session. I found nothing, so I spritzed the room with the odor neutralizer we keep for the diaper bin, removed the diaper bin from the room, and hoped for the best.

This morning the offending odor remained! Because I found myself with unexpected extra time on my hands today, I decided I would rearrange Little Guy's bedroom like I was planning and eradicate the odor. I started by moving all the furniture and vacuuming along the baseboards and smelling the carpet as I went. Nothing there. I smelled the crib bedding and stuffed animals. Nothing there. I stuck my head in the giant tub of stuffed animals. Nothing there. I cleaned and polished all of the wood furniture in the room to freshen those up. As I began sifting through the collection of tubes of various rash ointments, baby meds, and other nursery paraphernalia on the changing table, I smelled it again. I stuck my nose in the stacks of cloth wipes and cloth diaper liners. All I could smell there was the scent of the heavy duty Desitin that never goes away. WHAT was it? Maybe the changing table itself was smelling from too many sloshes of wipe water...the wipe water. 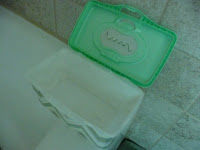 I opened the lid of that container and gagged a little. Normally it just smells faintly of baby shampoo because all I use is water mixed with a little baby shampoo. I quickly ran the container to the bathroom and poured out the offending liquid and scoured the container with hot water. What in the world caused that? I am thinking several factors could be involved. One--because we do not have regularly scheduled poopies, sometimes the water isn't used very often and maybe it sat longer than it should have. Two--something got into the wipe water during the process of changing a diaper, this one I think unlikely because I always wet my wipes in prep and then begin changing. Three-- and the one I am leaning towards, the baby shampoo which I bought stinkified my wipe water. I recently bought some J&J's Baby Oil Baby Wash at the grocery store because we had been out of baby wash for several days and had been using regular soap to bathe his very dry skin. I normally try to by a natural baby wash, but the budget was particularly tight that week. This baby wash was on sale, and a baby wash with baby oil seemed like it might be good for his skin. I don't like this product for a couple reasons, mainly the design of the bottle. It comes in one of those bottles that looks upside down, where the lid and opening are at the bottom. From the first time I used it, there had been a puddle of goo underneath the bottle, it leaks terribly. Because of the shape of the bottle it cannot be turned upside down. It even leaks when lying on its side. Then, when you open it to use it it just blobs out. I guess the good thing is that it will be used up quickly and I will have to buy something else--a silver lining.

I don't usually rant about a poor purchase, but I really think that shampoo stinkified my wipe water! I had just refilled it using that shampoo a day or so before, well who knows? A lesson learned--beware the wipe water!

On a side note, as I am sitting here enjoying this blissfully quite couple of hours while the big boys are away and Little Guy is asleep, I am suddenly serenaded by the stereo in the other room. Yous see we have a haunted stereo, well really it has some personal electrical issues! It is a very old, mostly broken, bulky, hand-me-down CD player/stereo that we connected to the television a few months ago to try and get better sound (why?). The first time we came home and found the stereo playing we thought it must have been the cat bumping into it with her shenanigans. Later we witnessed it spontaneously turning on in the middle of the day! It only happens occasionally, and hasn't yet happened at night, but I think we have plans to remove it. Today I was serenaded with what sounded like the Christian music station and then maybe and 80's station? I turned it off, I like the quiet.
Posted by Cloth Diaper Club at 11:14 AM 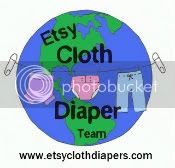